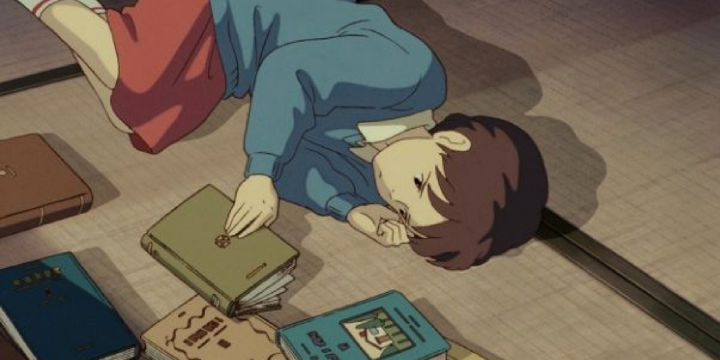 The other day, I sat down with my creamsicle orange cat and a bucket of popcorn and cried my way through a triple feature: Ella Enchanted (2004), The Bodyguard (1992), and Whisper of the Heart (1995). I chose these movies because my brother had called me the night before with bad news about our mother. Her chronic physical pain had turned her against her own body. I reached for these movies, despite their quirky dissimilarities, because they all make me believe in love—love in “medieval” “England,” love between gorgeous Whitney Houston and milquetoast Kevin Costner, and love between a boy with a craft and a girl who aspires to study her own. A good love story is my chicken soup; my way to self-soothe while my mother was busy, in pain, or just vacant.

Whisper of the Heart is one of Studio Ghibli’s most understated films. Written by the legendary Hayao Miyazaki and directed by Yoshifumi Kondou, it tells the story of 14-year-old Shizuku, who endlessly pursues her curiosity (and a cat named Moon) and finds herself at a glittering antique store. There, she meets Seiji Amasawa, the boy whose name she recognizes from the check-out cards of her library books. Seiji knows what he wants to do (craft violins) and has a plan to do it (study in Italy); Shizuku, struck by his certainty and passion, realizes what she wants to do (write stories) and struggles with how to do it.

I don’t clearly remember the first time I saw this movie. I know I was about ten. I was sitting in my favorite chair—a red-upholstered stitching of pale yellow stuffing and wooden panels that my cat had scratched to hell and back. My mother was in her own chair, also red, but scaled up ten times. Whenever I dared to sit on it, I felt like a doll lying in a life-sized bed. My mother was probably asleep; she was asleep more often than not. She had chosen the movie, but I was its lone captive. I watched as a girl, who seemed so distantly older than me, ran around Tokyo with her little brown suitcase chasing after a round gray cat. To my confusion, she kept singing the very American “Take Me Home, Country Roads.” I worried about her, this barely-teenager exploring a big city without her parents or even a friend to walk with her. Doesn’t she get lost? I thought. Don’t her parents care?

When I was ten, a two-hour movie felt longer than my entire life. The film ended and I forgot about it. Five years later, I was working through Studio Ghibli’s catalogue with more attention, and was surprised to see that I hadn’t dreamt up a girl writing a story about a cat statuette called The Baron. At fifteen, I was a sophomore at my performing arts high school majoring in creative writing. I had no idea what I was doing, especially in my first poetry composition class. I was afraid of line, annoyed with meter, confused about imagery. My first tries were narrative poems with “lines” that spanned the page and tried to carry huge stories about war and death on the backs of shambling allegories.

Shizuku is a novelist at heart, but when I revisited Whisper of the Heart, I saw myself in her so clearly it startled me, like in a too-polished mirror. Like me, she was a bookworm who relished research and consumed as many stories as she could fit in her head; she used to be sure about her future, pursuing academics, but when she realized she wanted to write, the future suddenly seemed impossible; she wanted to write, but had not written and had no idea if she had the talent or endurance; she was scared of failing, but even more scared of throwing away Seiji’s faith in her and leaving her story untold.

Being an artist is such a fragile thing. My mentors in high school always told me that you’re never an emerging or aspiring writer; you’re a writer as soon as you choose to be. That idea continues to reassure me, but in high school it was hard to believe that I had earned the right to call myself a poet after a couple of clumsy attempts and a lesson about enjambment. I didn’t understand that there’s nothing to earn.

When Shizuku finishes her novel after a flurried two months of forgetting to eat and neglecting her homework, she rushes to the antique shop owned by Seiji’s grandfather, Shiro Nishi, and tearfully asks Shiro to read the whole thing at once. With Seiji gone to Italy for a violin-making apprenticeship, Shiro, an elderly craftsman with incredible talent and equal empathy, is Shizuku’s most important supporter and mentor. Earlier in the movie, he showed her a rough stone with beryl shining through its cracks—a closed geode—and explained to her, “You and Seiji both, you’re like that stone. Unpolished stones in their natural state… You have to find the rough gems inside yourself, take the time, and polish them.”

Shizuku spends the hours Shiro takes to read her story curled up on his porch in the cold, so nervous she fell asleep. When Shiro tells her that her story is good, she cries and demands that he tell the truth—that her story is awful, makes no sense, is too long, is too flawed. Like me, Shizuku believes that she hasn’t earned the right to call herself a writer, or to write at all. What Shiro tells her next has stuck with me through the years, so much that I forgot it came from this movie: her story is unsubtle, unfinished, and roughly hewn, but it’s as valuable and whole as the geode. She has to take her time to polish it, but the work she’s done to unearth it from the quarry is astounding. Creating something is astounding. 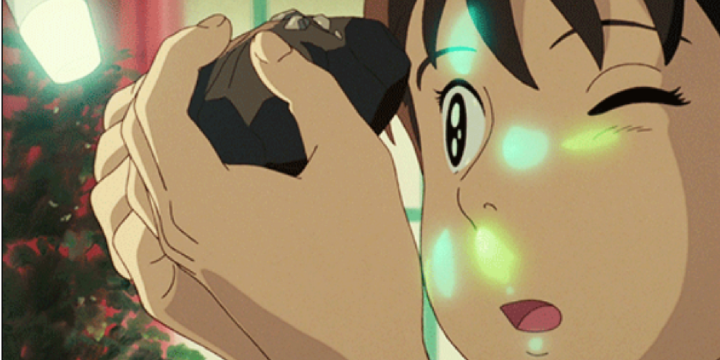 Seeing that geode when I was fifteen nearly made me cry. In middle school, I had tried my hand at a “novel” (it filled a 100-page composition book, skipping lines). It took me much longer than two months—if I remember correctly, almost a year of stopping and starting—and when finally it was done, I showed it to my mother while she was putting away dishes and told her I wanted to publish it.

She told me I was being dumb, that my story was silly. She slammed another ceramic plate into the cupboard. When I clutched the notebook closer and argued that I would find a way to get my story published, she said I was just a child. She didn’t look at me as I ran from the kitchen.

She was right. My story, like Shizuku’s, was confusing, stuttering, meandering, and nonsense to anyone besides me. But as a child who’d spent a year chipping away at a cliff and had come away with an uncracked geode that I was so, so sure held gems inside, I didn’t want my mother’s pragmatism. I didn’t want to cry and bury that notebook away in shame; I wanted to hear that the work I’d done was worth something.

At fifteen, I thought back on that interaction with embarrassment. I still felt foolish and naïve. But even then I realized that Shiro’s advice was the right thing to say, to any artist with a first draft, at any age: keep going.

Since that first attempt, I’ve stuck with poetry, despite how much it used to scare me. At twenty, I’m a junior in a creative writing program and looking for a home for my first book. I’ve consciously called myself a poet for five years, and I’m stubbornly proud of the work I did in middle and high school despite its roughness. Sometimes the whirlwind of college sweeps me away for weeks or months, I’m unable to write a new poem, and I give up on myself—I’ll be a hermit, I say, or a professor, a pastor—but never for good.

Shizuku initially develops a crush on Seiji because she realizes that he’s read all the same library books that she has. (Later, he tells her that he saw her at the library a long time ago, but he didn’t see a way to interrupt her reading to talk to her. He checked out books he thought she would like and waited for her to notice his name on the library cards.) When she follows Moon to his grandfather’s antique shop, she meets Seiji again and watches wide-eyed as he chisels the scroll of a half-finished violin. Watching him work, seeing his concentration and passion, inspires Shizuku to start writing and makes her realize that Seiji isn’t just a dumb jerk, but a complex boy. She starts falling in love with him. Like every other Studio Ghibli love, it’s both young and ancient, troubled and pure. Shizuku doesn’t know how she can stand Seiji’s two-month apprenticeship—nor his ten-year training in Italy, if his apprenticeship goes well—but she encourages him, just like he encourages her.

Because this is a Studio Ghibli film, love is the greatest good—so Seiji and Shizuku reunite after his apprenticeship and he asks her to marry him when he’s done studying in Italy. She says yes, and the movie ends. It’s one of the only happily-ever-afters I’ve seen that has a plan for the future, and so one of the sweetest. This movie, unlike other Ghibli films, doesn’t dazzle with folk heroes or feral girls or self-obsessed sorcerers or river spirits. Whisper of the Heart tells a story so ordinary, it could be anyone’s life—it is every artist’s life. As artists we perform the alchemy of turning our humdrum, leaden lives into gold. Magic is the goal—but that alchemy isn’t possible without the Seijis and Shiros who ground and support us.

Watching this movie, so familiar but as distant as a dream; remembering all its soft breaths and joyous exclamations as they happen; hearing Shizuku and her friends sing, “Almost heaven, West Virginia, Blue Ridge Mountains, Shenandoah River,” while I sit on my friend’s couch in the eastern hills of the Blue Ridge in Virginia; noticing cicadas in the background of the summer scenes that echo the ones that live in the bushes under my bedroom window back in Florida; realizing where the idea of the geode that I’ve held onto for so long comes from; desperate for genuine love after my brother called to tell me our mother is sick and will only get worse; I realized this movie still has more to teach me. I love it for that. Until next time. •

All images © Studio Ghibli and Toho

Dean Symmonds is a lesbian poet from the South seeking their BAs in Creative Writing and Religious Studies at Hollins University. Their poems have been published in magazines such as Bad Pony Magazine, Monstering, Crab Fat Magazine, Gravel, and The Album, and forthcoming from Lavender Review. Their academic work on the Virgin Mary and Southern womanhood was published in the Hollins Digital Commons in 2017. You can find them on Twitter.