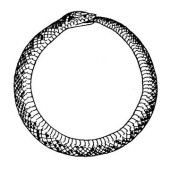 The ouroboros is an ancient symbol of a dragon, or serpent, eating its own tail. With origins in Egyptian iconography, it has been adopted by many cultures, most notably in alchemy. It is a strange, persistent image. It continues, in today’s modern magical and mystical culture, to symbolize eternity, reincarnation, the eternal return; it is a continual never-ending recreation.

The snake consumes its own body.

I have found a funny sort of mimesis in the ouroboros, in the serpent – that continuous hunger. For me, the body of the snake is a traumatized body. It is the uncontrollable, unstoppable compulsion to digest one’s own past, the need to consume our own bodies. That exhaustive circling, that thoughtless shape of memory. There is a temporal space constructed by trauma and therefore understood only by those who have experienced it that is simultaneously physical, emotional, and spiritual. This space is generated through a particularly circular mode of remembering and re-structuring of memory itself. The life lived after trauma ceases to be linear – spanning simply from birth to death – and instead becomes ouroboric.

Were the serpent ever to succeed and consume himself, a decreation would take place. But it never does.

I look to the mystics.

I write a paper about Julian of Norwich, the medieval mystic who, on her deathbed, dreams that she recreates Christ’s wounds on her own body. Julian is 31 when she becomes ill and lies feverish on her bed, waiting to die. In her fever dreams, she sees Christ – graphic images of his crucifixion and death. She calls them “showings”; they restore her health. I ask questions about her mystical experience, her closeness to death. I ask: What happens when your traumatic life experience is death? What would a mimetic return to death look like?

I write a paper about Emily Bronte’s Wuthering Heights. Bronte’s narrative is a loop: different chronological spaces overlap and encroach on one another. Wuthering Heights, the house, the structure exists as a traumatized body full of ghosts. Everything is a loop: the two Katherines, the two timelines,  the ghosts themselves. What is a ghost but a body that cannot help but replay its own suffering? Anne Carson writes “The Glass Essay” in which the narrator-body translates her own trauma through an exegesis of Bronte’s novel. Carson writes, “time in its transparent loops as it passes beneath me now.” She writes, “I feel I am turning into Emily Brontë, my lonely life around me like a moor.” She writes, “What was this cage, invisible to us, which she felt herself to be confined in?”

I write my thesis about Margery Kempe, another medieval mystic, who refers to herself only as “the creature” and cries uncontrollably in the streets. Her visions of Christ’s suffering consume her body and her mind like a possession. She doesn’t eat, she denies pleasures of the flesh; she has no body or self, there is only “the creature”. She meditates on suffering.

I write about Flannery O’Connor, that modern mystic, whose characters loved God so much they became mutilated, disfigured, and deformed. Flannery O’Connor writes, “in some medieval paintings…the martyr’s limbs are being sawed off and his expression says he is being deprived of nothing essential.” Flannery, who walks around on her farm among the peacocks, metal braces supporting her body, she writes, “I do not know you God because I am in the way. Please help me to push myself aside.”

What is it like to disregard the body? How do we get around ourselves when we are always in the way? I wonder how badly the serpent wants the loop to end, to consume himself until the flesh is gone. Is that possible? What would that look like, that nothing-space? To complete the autocannibalism of revisiting one’s own trauma, for it to be over?

Where do we find the secondary image of the ouroboros: at its center. Because while the serpent is so busy trying to consume itself, the empty circle it creates is there, containing nothing. The serpent creates a nothing-space and it makes me wonder if his desperate circling is an attempt to reach it. But there is no reaching the nothing-space, because if the serpent reaches it – thus disrupting the circle of its body – then that space is destroyed. It – the serpent – can only ever be nothing-space adjacent: circling, circling, circling. We want the nothing-space so bad, that circle, that hole. What happens there? Nothing! This is the place where the body doesn’t exist. It is so seductive, tantalizing. The eroticism of forgetting.

To the mystics again: In 1310, before being burned at the stake in Paris, Marguerite Porete writes A Mirror of Simple Souls. It signs her death warrant. Porete tells us that we can make ourselves so small that we disappear into the divine; she tells us that there is a union with God that destroys the self.  She tells us about nothingness, how to get beyond ourselves. Her book is an instruction manual for getting around ourselves when we are in the way. I think about what is must have been like. Her body must have burned so slowly.

In New York City, Anne Carson teaches Maggie Nelson to leave a space empty so that God can rush in, a hole for the divine. In a different space, she writes about Porete,  “He has burned me out of myself / absolutely.” In my room alone, I feel Flannery’s frustration: “Please, help me to push myself aside!”

Six hundred years ago, Christ was a woman.

Julian, she knew this. Christ, who she called, “Our tender mother Jesus”. Julian lived her life sitting frail and cold in a tiny cell; Julian was enclosed. She had a little window, just wide enough to see the altar of the Church, and wide enough to confess. Across from that window was another, even smaller, from which she preached to the townspeople of Norwich. Julian, our mother, Julian who knew the truth.

God the Father, he punishes; Christ the mother nurtures and comforts. “And our savior is our one true mother…by whom we shall always be enclosed.” Julian, what is it like to be enclosed? Did you reach it – that nothing-space? Is it Christ, our tender mother, chasing his own tail, or is that absurd? I wish so badly that it were, but I’m afraid that I find the serpent more comforting – more relatable.

Nevertheless, the shape of the ouroboros is there in Julian, in her Revelations; it persists. Julian, reliving her near-death like her own personal rapture.

That stupid, silly snake circling ‘round and ‘round, so hungry. Why do I love to think about it turning when it sits so still on the page? Why do I write myself in circles? The truth of the matter is that I find comfort in the stories of medieval heretics, those fiery devout women, even though I have never received revelation and cannot feel the flames. Those women whose visions make lesser men flinch. Julian understood better than Caravaggio what it meant for Thomas to press the tip of his finger into Christ’s open seething wound, that warm sensual flesh. “Then…our Lord looked into his side, and gazed, rejoicing: and with his dear gaze he led his creature’s” – that’s Julian, our creature-mother – “understanding through the same wound into his side.” She puts her whole self into his wound! While the rest of us are condemned to simply circle around it!

I keep circling, myself (circling myself). I am so aware of that space I create, that nothingness, that possible solution or relief. The food of my own body is a circle of images and I keep eating and eating. I read Marguerite so that she can teach me to annihilate myself; I ask Julian where the flesh opens; I beg Flannery: “teach me how to push myself aside.” The serpent grins, always biting down.

“The Glass Essay” from Glass, Irony, and God, Anne Carson

The Violent Bear It Away, Flannery O’Connor

Alice Lesperance is a 26 Southerner-turned-New Yorker-turned-Southerner-again who has been blogging since she was twelve. She loves music, dogs, and YA lit. She’s written for Autostraddle, The Youngist, Scalawag magazine, and One Week/One Band. She lives in Charlotte, NC with her girlfriend and their cat Stevie Nicks.